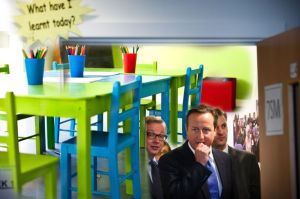 In a sharply honed critique of the latest Policy Exchange report, ‘A Rising Tide: The Competitive Benefits of Free Schools’,  Henry Stewart of the Local Schools Network demonstrates how deeply flawed the contradictory claims in the report are. At one point Policy Exchange says, ‘free schools do not just help the performance of their pupils, but pupils in surrounding schools’. This was directly quoted by David Cameron when he made his astonishing announcement that because of their success, he planned to open a further 500 ‘free schools’  should the Tories win the election in May. However the PE report also declares of primary schools ‘Schools closest to Free Schools perform in line with national results at primary.’

Broadly the only time that there was a statistical difference between the performance of ‘free schools’ and surrounding schools with unfilled places was when the first five  ‘free schools’ opened in 2011. As Stewart observes, ‘there is virtually no difference between the change in results in schools close to free schools and those nationally. For 2012 and 2013 openers, the fall in GCSE results is exactly the same and for 2014 openers there is just a 1% difference.’

Stewart concludes, based on the Policy Exchange data, ‘The data in the report is clear. For both primaries and secondaries, there is no benefit to nearby schools from the creation of a free school. Free schools are still an experiment. The first exam results will not be available until 2016. There is no evidence, in this report or elsewhere, of educational benefit from the considerable resources devoted to them.’ You can read Henry Stewart’s report on the LSN website by clicking on this link  and the Policy Exchange report can be found here.